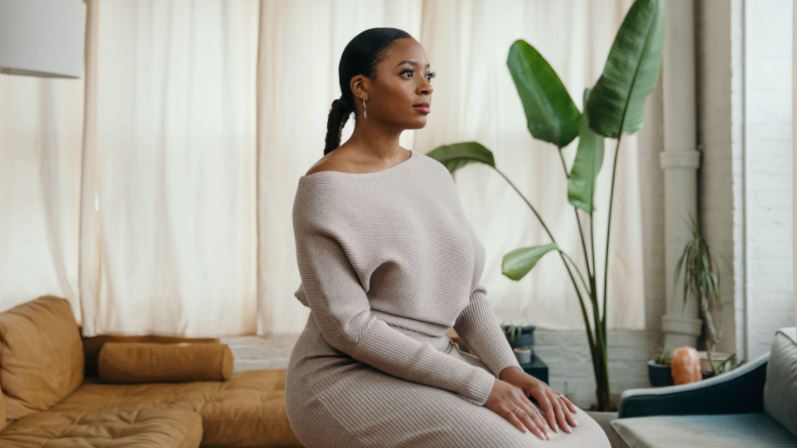 As a Black female founder who raised venture capital, Nude Barre’s Erin Carpenter faced ongoing pressure to scale quickly. Here’s why she wishes she had taken it slower and with more grace for herself.

Erin Carpenter, 37, knows what it’s like to be overlooked in an industry that caters to others. A former New York Knicks City Dancer, she had dyed her nude dance tights to match her skin tone ever since she was a child. Not wanting others to feel the same exclusion, she founded New York City-based Nude Barre in 2009, making and selling tights and undergarments in a variety of skin tones. It took almost a decade before Carpenter received her first investment check, and even with endorsements from Serena Williams and Bumble founder Whitney Wolfe Herd, she struggled to fundraise. When she was nine weeks pregnant and as she hustled to and from venture capital meetings in June 2021, Carpenter began to miscarry. Instead of pausing, she worked through her meetings saying nothing to investors–because, sadly, she felt there was no other way. Now, having raised more than $3 million, she shares her story in hopes that other women don’t have to feel the same pressure. –As told to Anna Meyer

When I founded Nude Barre in 2009, I was a single woman in New York City. I used $3,000 of my savings from doing commercials and odd jobs within the dance entertainment industry to get started. It was barely enough for a direct-to-consumer business, especially considering that we make products in 12 different shades of nude and in different sizes. My savings got me an initial run of inventory that I took door-to-door, selling to every NBA and NFL team and Broadway show to which I had personal connections.

But I had to bootstrap, because when I first tried to pitch investors, most of whom were White men, I kept getting noes. The investors didn’t understand the big picture of representation, even though I told my personal story of dyeing my tights and explained the physical labor required to make products work for me as a Black woman. Even after I proved traction–I hit six-figure sales within the first couple of years in business–the target kept moving. When I’d hit $500,000 or $1 million in revenue, maybe then they’d write a check. I felt defeated.

While I was growing my business, I also was growing my family. I became a mom in September 2018. Although my mission has always been about empowering women, having a baby girl made it that much more important. In thinking about my own childhood experiences of not being able to find representation, I spent time post-partum wondering how I’d explain that to my daughter. I wondered how I could provide a better example for her and other young Black women.

Around the same time, tennis pro Serena Williams became a customer anonymously on our website. I sold out of the product she wanted and her team reached out about restocking. I explained how I was bootstrapping and looking for investment to help us scale, and I was then told about a pitching competition she and Whitney Wolfe Herd from Bumble were doing to invest in female founders of color. Nude Barre won, and they wrote the first two checks I received in 2019.

I began pitching right off the heels of that competition. While I still received many noes, my third check came from tech entrepreneur Jason Calacanis and my fourth check was Stitch Fix’s Katrina Lake. With all of the great traction and momentum, I felt like I had a small window of time to do an extended raise. I was excited for all of these growth opportunities, but I also was scared, because I didn’t want to crash and burn out. Even amid the rapid growth, I always knew that I wanted to have another baby.

I was taking five to six investor meetings a day plus running the company. I was exhausted. In May of 2021, I found out I was pregnant, and my husband and I were overjoyed. After about nine weeks, on a day when I had two in-person meetings back to back, I went to the bathroom between meetings and discovered that I was miscarrying. Words can’t describe the heartbreak.

Although miscarriages are so common, I personally felt like I had failed. Did I put too much stress on myself with my business to cause this? Even after that bathroom break, I still tried to seem normal in the meetings that followed. Professionally, I went through that trauma alone. I didn’t feel like I could say what was happening to me to an investor–I had to keep going. As a Black woman, when less than 1 percent of U.S.-raised venture capital goes to founders like me, I felt honored and privileged to have that opportunity to raise capital and pitch great VCs and angels. I couldn’t tell investors to wait after I spent more than a decade chasing after them.

But not sharing my situation and simply working through my recovery put more pressure on me. I kept pushing to grow the business while no one had any idea what was going on. If I didn’t hit those KPIs and those goals, I was worried that people would question my capability as the founder and CEO.

I later decided to tell my 11-person team what happened to me. I try to lead with honesty, sharing how I’m feeling and what’s going on with the business so that we are all on the same page. Looking back, I wish that I would have stepped up and advocated for myself sooner, because I probably would have gotten more grace from the investors.

As women, we’re always trying to do everything and have it all–but it’s just not realistic. We need to set an example for other women in the workplace. If you’re going through personal difficulties, don’t feel like you have to keep going. If you’re not healthy, then you can’t present your best self and lead like you want to lead. It’s OK to put yourself first when you need it.

Miscarriage and pregnancy is such a quiet topic for founders. I used to think the best time for founders to start having kids is after an exit. But there is no perfect time, magic day, or number that’s going to get you this perfect life of mothering and running your business. When I had my first daughter, I felt like a lot of things opened up for my business. It was very serendipitous, even if it meant managing parenting on top of everything else.

I prioritize my time and energy a lot better now. I also became passionate about being honest about my journey and leading with the authenticity I want to model for my daughter. It’s OK that surprises come up in life, because no one told you that it would happen this way. But the more we talk about them, the more we can open doors for everyone to achieve what they want with their businesses.

View all posts by flysunairport →

44 Profitable Ideas to Make Extra Money on the Side

No comments to show.